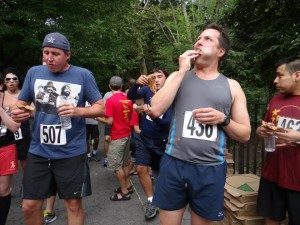 Today I ran the 2013 NYC Pizza Run in Tompkins Square Park, in Manhattan’s East Village.  My official race time was 17:33, which equated to 6th place overall and 5th place among males.

Here are my unofficial Garmin stats:

The weather for this race was pretty good: about 69 degrees at the 11am-ish start with 75% humidity. I didn’t really even think of the weather so that was a good thing.

The course is four loops around the park, starting at the midpoint of the south side. The race is advertised as 2.25 miles, though my Garmin tells me it is closer to 2 miles, logging 1.96 miles. At the end of your first, second, and third loops (where the race began), you eat a slice of pizza and can’t move on until it is fully in your mouth. When you run your final loop, you curve slightly into the park past the people still eating and across the finish line.

You are allowed one bottle of water provided by the race. (Not sure if you could bring your own beverage — seems it could be cheating if you’re competitive!) Turns out this water supply was pretty crucial for getting down the pizza, provided this year by Certé. The pizza, running I think about eight decent slices per pie, had cooled by the time we ate it. The crust was the surprise element to the race: It was handtossed and thin, but about an inch or two wide. This equated to a large dry “rind” of pizza to consume against the wetter, cheese-and-tomato sauce portion of the pizza. What did this mean in terms of the race? Well, when you are cramming a slice into your mouth, you are going to have a pretty tough time getting the slice down your throat without choking on toasted dough! Also, since it was dry, it wasn’t as easy to push it into the mouth, meaning you really had to chew to get the slice in the mouth. The crust was probably the biggest obstacle of the whole race, and I heard several finishers talking about it in the end.

I was having visions that I might actually have a chance of winning this race, so I decided to think about strategy a bit in case it would mean the difference in a first-place or other-place finish. Some of the things I told myself included:

These tips definitely came in handy, but I never could have planned for the pizza factor. After my first lap, I forewent the bottle of water (more like, I forgot it) and went straight to the slice. It was definitely something that would take a bit of time to consume, but the crust was the hard part. Being dry, it wasn’t as easy to eat. I reached the first station around 5th place I think, ahead of the woman who would eventually beat me. I was a little discouraged when I saw the very fast eventual 1st-place winner get out of the pizza station so quickly, while I was suffering to get through my dry crust.  The woman also shot out quickly, and it looked as if I wouldn’t able to catch them given the amount of time this was taking me. Rather than waste time swallowing, I decided to take off once my slice was completely in my mouth.

This meant my second lap was scary. How scary? Well, imagine running with a full mouth of food. Doesn’t sound scary? Well, then imagine that bits of that food ball in your mouth are dry bits of bread, so that when you inhale, sometimes the dry bits shoot into your windpipe and make you choke. And I do mean “choke”! I was repeatedly so close to vomiting not out of nausea but out of food-down-the-windpipe that 3/4 the way through the second lap I pulled alongside Ave. A to projectile vomit … or so I thought! The cough I let out seemed to free the last jarring bits of remnant pizza in my mouth and I was able to make it to the pizza station for a second time.

And that’s about right: Just as I was swallowing the last bits of pizza from the prior pizza station, I was arriving at the pizza station AGAIN! Funny how that times out. This second time I definitely got my bottle of water and used it to get the dry crust down my throat faster. I heard (though can’t confirm) that the winner was actually drinking water before eating to whet/wet the throat a bit. Not sure, but overall water is definitely a valuable assistant. That third loop’s food ball crammed in my mouth wasn’t affecting my breathing as much and I wasn’t choking as much either. I wasn’t running too fast for this loop — perhaps a mix of knowing I’m not going to win or just consuming this pizza without choking — but I still was making decent time relative to the other runners.

The third time I hit the pizza station (or was it the second?), I confessed to the reporter who I believe was Madeleine Cummings that I had been choking and water was my strategy for next year. Eventually I got out of the station, and knowing this was my last lap, I ran in hopes of passing people and guarding against being passed. There were no real rivals on my tail from what I could tell, but as I made the final turn onto 7th St., I saw a runner ahead of me who had been near my pace at the beginning. This is the part of the race when I turn on my sprinting and I certainly did, having to dodge not only him (I’m guessing he finished 7th overall) but also the few spectators who’d lined the sidewalk to watch. The crew wrote down my number as I crossed the finish line and they logged 17:33.

It was a fun, different, somewhat disgusting, but definitely challenging way to race! I’m thrilled I got to do it after wanting to do it for about two years now and not being able to. At the end, people are flecked with pizza sauce in various places on their bodies, with some smaller people clutching stomachs from eating so much. Myself, I wasn’t nauseated by it; I just had a sore throat from the coughing and choking. Not a big deal or any reason not to do this — though definitely drink water with your pizza!!!

This site uses Akismet to reduce spam. Learn how your comment data is processed.